When I was in high school there was a brand of gear (clothing, stickers, etc.) called “No Fear.” Their logo looked like this: 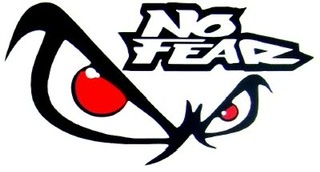 I had that very sticker on the rear window of my 1988 Chevy S-10 pickup. I thought I was cool. I realize now, and in reality I knew then, that I’ve never been cool, but that’s beside my point.

As is often the case, Christians capitalized on the popularity of the “No Fear” brand by creating their own line of products called “Know Fear.” This was their logo: 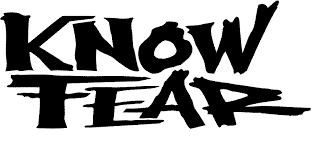 The idea behind the “Know Fear” brand was a couple of verses found in Proverbs regarding fearing the Lord.

The fear of the LORD is the beginning of knowledge;
fools despise wisdom and instruction.
Proverbs 1:7

The fear of the LORD is the beginning of wisdom,
and the knowledge of the Holy One is insight.
Proverbs 9:10

The concept of fearing God is lost on most of us. It’s also one that, at the outset, can be easily misunderstood. When we think of fear, our minds naturally wander towards the idea of being scared, horrified, panicked, etc. The mention of the word might even instigate some level of adrenaline as the body naturally prepares to cope with horrible things. This fear is what the virgin Mary and the shepherds in the fields felt when the angel(s) appeared to them. We know this because the first thing out of the mouth of the angel(s) was, “Fear not” (Read Luke 1 & 2).

The fear of the LORD mentioned in the Proverbs above is a different kind of fear. Some of the men in our church have been going through Jerry Bridges’ book The Joy of Fearing God. Now, there are two words you don’t see together often: fear and joy. We’ll get to the joy part a little later, for now let’s focus on a definition of fearing God.

Bridges puts forth the following definition: “Perhaps a good working-definition of the fear of God is something like this: to truly fear God means to be in awe of God’s being and character” I have also heard it said that fearing God can be defined as “reverential awe.”

The greatness and grandeur of God is not something at the forefront of our minds. Thoughts of His greatness might come to us when we’re camping and we look up in the sky and see the vastness of stars, or when we go on a whale watching adventure and take in the magnificent mammals living in the sea. Perhaps we think of God’s greatness standing on the shore of the ocean or flying in an airplane looking at the top side of clouds. However, we rarely have God’s greatness on our minds during the mundane of everyday living.

This, Bridges says, is the problem. We don’t take God’s character into consideration nearly enough. If we were to fear the LORD, in the proper understanding of the term, there would be no room for the word “mundane” in our vocabularies. The more we come to understand God and His character the more wonder we will find in the everyday tasks. When God and His glory are on our mind then even the seemingly menial tasks of folding laundry or washing dishes can be full of unspeakable awe.

That brings us to the ‘joy’ part of Bridges’ book. Let me finish his definition of fearing God:

“Perhaps a good working-definition of the fear of God is something like this: to truly fear God means to be in awe of God’s being and character as well as in awe of what He has done for us in Christ. When you put these two ideas together, you have an absolutely sovereign Creator of the universe who punishes those who resist Him, and yet loves us and sends His Son to die in our place. Surely that’s good reason to fear or reverence Him.”
http://thebriefing.com.au/2002/09/the-fear-of-god-talking-with-jerry-bridges/

Fear not, but know fear.

From the Mouth of Babes